I grew up in old Hollywood, when you didn’t lock your front door, and neighbors took care of one another. My mother and father were Irish immigrants, and Catholic. While most people were friendly, a strong anti-Catholic sentiment was tangible in Los Angeles at the time, and I was beat up by a group of boys who didn’t want an Irish Catholic kid living on their turf.

The prejudice was fueled by a radio preacher of the day named “Fighting Bob” Shuler, who passionately preached against Catholics, African-Americans and anyone else he thought was “ruining” society. Strangely, he defended the Ku Klux Klan but attacked pastors and preachers such as Billy Sunday and Aimee Semple McPherson, not to mention his rants against the breathtaking dramatic services taking place almost daily at Angelus Temple.

In contrast to Shuler’s reviling, everyone was welcome at Angelus Temple. I never felt ostracized by Sister McPherson or the people who served with her in ministry. It was one of the things that I appreciated most about attending services at the temple.

Her ministry to the hungry during the Great Depression was superior to any other in the city. She encouraged members to check in on their neighbors and to invite people for dinner, especially those who had lost their jobs or families who couldn’t afford to buy food for their children.

Los Angeles had experienced a tremendous cultural and financial boon in the 1920s. But the façade of stability gave way to bank failures and severe financial depression by the 1930s.

Everyone was welcome at Angelus Temple. I never felt ostracized by Sister McPherson or the people who served with her in ministry.

My father was a fireman with the City of Los Angeles. I remember a time when he was ill and had to take time off work to recover. His fire station asked him to make time during his recovery to regularly check in on families around town to be sure they had enough food. I remember him inviting people to dinner with our family, and also saw him give people money out of his pocket to buy groceries. He was a U.S. veteran of World War I, and this was how he lived his life.

Mother and Father built a comfortable house for our family on Wilcox Avenue in Hollywood, near Sister’s Hospital (today called St. Vincent’s Hospital), where I was born in 1922. Father earned $100 a month as a fireman and considered it a very good job, a job he wanted to keep.

Word came down through the ranks of the firehouse that every fireman in the city was being required to attend a service at Angelus Temple. No reason was given, but my mother and father realized this edict was not optional. They didn’t like the idea of attending a Protestant church, and reluctantly made their way to the temple. They never hired a babysitter for me, so I went with them. 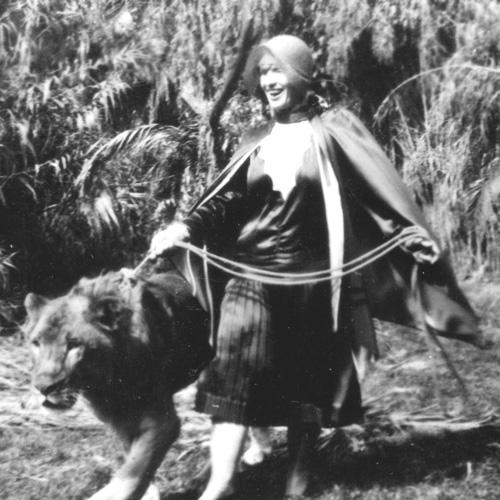 Once inside the sprawling Angelus Temple auditorium, we climbed multiple flights of stairs to the only open seating we could find atop the highest balcony, almost near the domed ceiling with its beautifully detailed painting of heavenly clouds.

I was 6 years old, and sat spellbound by the most dramatic theatrical performance I had ever witnessed. With full orchestra and a huge cast of characters, this miracle play told the biblical account of Daniel and the lions’ den. I was enchanted by the production and moved by the passion of this preacher of the Lord as she called on members of the audience to a life of commitment to the Savior.

“Who will dare to be a Daniel today?” Sister McPherson asked. It was more of a declaration than a question, and I could not remain in my seat. I jumped to my feet and waved my arms. “I want to be a Daniel!” I shouted.

My Catholic parents were aghast, one on each side of me. They grabbed my arms and returned me to my seat with a thud. But I knew I still wanted to be a Daniel, and for the rest of my life I remembered that moment when I answered the call of God for my life.

This article is adapted from a video interview with James Howard Cremin recorded on March 8, 2004, in Los Angeles.

ShareTweetEmail
James Howard Cremin was a noted Los Angeles pathologist and author who responded to an altar call at age 6 at Angelus Temple.
Advertisement