It was 1931, and I was 4 years old when I gave my mother the slip during Vacation Bible School (VBS) at Angelus Temple and set out to find something to eat. I remember wandering outside Aimee Semple McPherson’s parsonage and finding the backdoor unlocked.

I walked into the kitchen and made myself at home. I found some juicy green grapes in the refrigerator, and sat down in the middle of the kitchen floor to enjoy my snack and play with my ball and jacks.

Just then, I looked up to see Sister McPherson walk in the backdoor. She was tall and beautiful with curls all over the top of her head. She must have been teaching in the Bible college next door because she was dressed in her white uniform with the Foursquare shield and cape around her shoulders.

Sister gave me a great big hug and then sat down on the floor next to me. She played jacks with me while I ate her grapes. I must be the only person in the world that can say I played jacks on the kitchen floor with Aimee Semple McPherson!

This wasn’t my first trip to Angelus Temple. I sat in the audience with my mother when I was 3 months old, as Sister McPherson water baptized my grandparents.

Then, when I was about 7, I was asked to sing a solo at one of the VBS graduation services. The song was one that Sister had written, called “The Lord Planted a Garden East in Eden.” The only problem was I couldn’t quite pronounce the word “Eden” and invariably said it wrong. 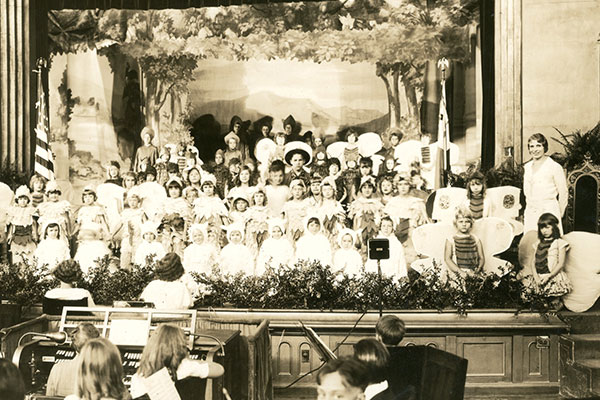 Sure enough, the day came for me to sing my solo, and my mother had dressed me up in a little yellow organdy dress. I stepped to my place on the platform next to Sister McPherson and sang my heart out—and, sure enough, I mispronounced “Eden.”

It didn’t seem to matter to Sister because when I finished my song, she picked me up and gave me a big hug and kiss. I will always remember that about Sister. She loved children, and I always felt loved and noticed by her.

During another service at Angelus Temple, people were lined up around the church waiting for Sister to pray for them. I noticed a little blind boy about my age waiting his turn in line. His mother stood with him, and when Sister saw the little boy, you could just tell her heart went out to him.

As she always did when praying for children, Sister got down on her knee so she could look the boy directly in the face. She spoke to him and began to pray for him. In just a matter of moments, I remember him saying that he could see. His mother let out a scream, and everyone in the place rejoiced. I will never forget that moment as long as I live. 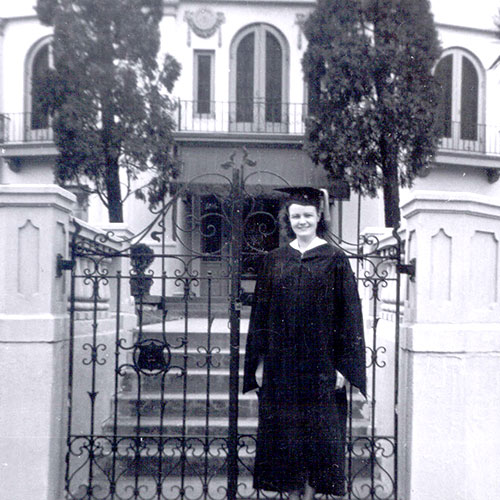 Years later, one of the Angelus Temple music ministers, Paul Mickelson, taught me to play the organ. When he said I was good enough, he gave me my own program on the radio. Most nights of the week, the radio station ended its broadcast with a 30-minute organ program from 11:30 p.m. to midnight. I was privileged to play for one of those programs each week for five years, broadcasting live from the pipe organ in Angelus Temple.

One late Monday night, when I was preparing to play on the radio, the church custodian told me there was a man sitting quietly in the back of the sanctuary who wanted to pray and wouldn’t disturb me. After I played my program, I closed up the organ and went home.

Several days later, the radio station engineer told me that the man quietly praying in the back of Angelus Temple that night was the evangelist Billy Graham. The year was 1949, and Monday was his regular night off during the eight-week Los Angeles crusades that established him in the world of noteworthy evangelists.

Apparently, he had always admired Sister McPherson’s ministry but had never met her. I guess he wanted to sit and pray in the place where she had ministered.

It’s a good thing I didn’t know Billy Graham was listening to me play the organ that night, because I would have been much too nervous to play.

Later, I would play the organ for services led by other notable ministers, specifically Foursquare Pastors Teaford, Dorrance and Ellithorpe, during weeknight services in Angelus Auditorium. I played piano for the Foursquare church in Paramount, Calif., and was a staff organist in other churches and also in three different hospitals in Los Angeles and Pasadena for more than 25 years, cheering up patients and playing for worship services.

Angelus Temple has always been like a second home to me. From the days when I helped myself to Sister McPherson’s grapes until now, the memories from years of service to the Lord are as precious to me today as they have always been.