Los Angeles in the 1920s was a very different place than it is today. Large wooden streetcars, painted bright red, traveled briskly to bring people from Baldwin Park to Echo Park and Angelus Temple to hear Aimee Semple McPherson preach.

My parents, George and Etha, were among that devoted flock. They brought a sack lunch every Sunday morning with plans to stay all day and attend morning and evening services at Angelus Temple. They didn’t want to miss a moment of what God would do.

I was very young when they first took me into the cavernous auditorium, and I was overwhelmed by the vastness of it—the mural of clouds on the domed ceiling and the bright light shining through the stained glass windows. It was all so big to a little child, and they later told me I cried so hard they had to leave to calm me down.

It didn’t take long before I enjoyed attending services at Angelus Temple, especially when Sister McPherson preached her illustrated sermons.

Most notably, I recall the night she preached using the illustration of “Jack and the Beanstalk.” It was staged in the most ingenious way, and I came to appreciate the artistry of a man named Thompson Eade, who worked night and day in the construction room of Angelus Temple painting backdrops for the impressive dramatic sermons.

I gave my heart to Christ at age 6 at my mother’s knee on the last day of 1939, and a few years later received the baptism with the Holy Spirit under the ministry of Ethel Heidner.

About the same time, a little redheaded girl named Mary Fields also gave her heart to Christ as Sister McPherson led her and other children in prayer for salvation during Vacation Bible School in Angelus Auditorium in 1941. God was preparing Mary and me for a lifetime of Christian service together as husband and wife; we just didn’t know it yet.

Leaders of The Foursquare Church have always held a deep dedication to youth camps. I became acquainted with Foursquare heroes of the faith such as Harold Chalfant, Roy Lane, Don Stauffer—men who were an inspiration to me and leaders who made sure places such as Camp Radford and later Camp Cedar Crest were built and maintained for generations of camps for children and youth.

I’ll never forget seeing respected pastor Milton Ellithorpe come roaring into Camp Radford on his motorcycle. I didn’t know that big-time pastors did that sort of thing. This young teenager was duly impressed. 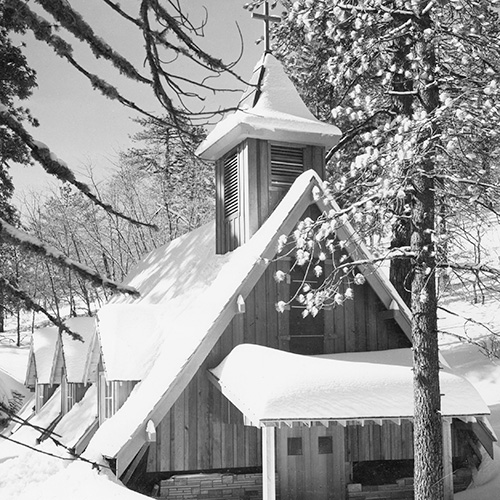 I also remember seeing an old cot sitting in the open under the stars at Camp Cedar Crest that Harold Chalfant slept on when he wasn’t working day and night making the camp ready for campers.

My pastor, Gayle Wood, was among the builders who built cabins and public buildings at our camp in those days. I remember mixing cement and putting the roof on our “Glendale” cabin when I was 15 years old, under the direction and supervision of Pastor Wood. The year was 1948, and we were the first ones to pick a spot and start to build, but were not the first ones to finish.

Mary Fields became my wife in 1951, and I graduated from LIFE Bible College (now known as Life Pacific College) in 1955. We departed Los Angeles for Emmett, Idaho, to become youth ministers there, and later would return to Glendale, Calif., and Pastor Gayle and Dorothy Wood, to serve with them as youth ministers at the Foursquare church in Glendale.

We became senior pastors at the Foursquare church in Bishop, Calif., and have enjoyed a full life of ministry and service to our Lord Jesus Christ.

From those early days—when my parents couldn’t afford a doctor so they prayed for healing when I was sick—to now, when our three children are all serving in Foursquare ministry, God has been faithful. God healed me of scarlet fever and other illnesses, and I can attest to His healing power.

Counting the great-great-grandchildren, five generations of Rufeners have served the Lord in Foursquare ministry, and all we can say is, “To God be the glory, great things He has done!”