Editor’s note: In July 1921—100 years ago this month—Aimee Semple McPherson held a series of revival meetings in Denver. During the revival, a special service was hosted especially for people seeking physical healing. Dubbed “Stretcher Day,” as people were carried in on cots, stretchers, chairs and beds, the event drew 12,000 attendees. The following article, adapted from The Bridal Call magazine’s August 1921 issue, is a condensed account and includes excerpts, also adapted, from an article that appeared after the revival in The Denver Post.

Although many attended the regular services, being carried on cots and beds, the sick and the afflicted throughout the city, homes and hospitals begged for a meeting of their very own. This was held in the forenoon of the closing Sunday.

Even though we had been expecting and planning for it, it was a shock to see the great numbers of beds, scores and scores of them, placed row on row in front of the platform. Many lying upon their deathbeds were still unsaved. How they needed Christ! Many knew little or nothing of real salvation.

Dozens of people raised their hands for prayer at the end of the message, signifying that they wanted someone to pray with them for salvation. A great scene indeed, a scene never to be forgotten. Of this you will read more in the following newspaper comment appearing in The Denver Post.

“Even though we had been expecting and planning for it, it was a shock to see the great numbers of beds, scores and scores of them, placed row on row in front of the platform.” —Aimee Semple McPherson

They were spread out before the great organ in fan-shaped formation. Every hospital in Denver had been combed for them. Dozens of private homes had contributed their quotas. Cots, stretchers, adjustable chairs and beds were lined up, each one with an occupant whose gaze never for an instant left the face of the woman in white up there on the platform. On every side was the audience, 12,000 strong, filling to capacity the main floor, balconies and galleries.

Palmer Christian sat at the immense console, down in the orchestra pit, his fingers on the keys. Back of the chair loomed the great organ, ready to peal forth harmony. Mrs. McPherson announced: “We are going to sing the songs they ask for.”

They sang “Pass Me Not, Oh Gentle Savior.” When the song ended, Mrs. McPherson’s eyes were wet. She leaned over and spoke to a worker at her side. “See that girl reporter down there,” she said in a low voice. “She is crying like a baby.”

She was. So were her companions at the press table, 14 of them. One man, a journalistic political war horse who had covered every Democratic and Republican convention in Colorado in the last 20 years, touched another reporter on the shoulder. His hand was trembling, and his eyes were suffused. “Never saw anything like It,” he said. “Never.” Song after song was sung, each one familiar to most of the audience from childhood.

The healing session was one of the most impressive of the revival services. It was literally a “revival of bodies” for many of the people. A battery of photographers, their flashlight “pans” held in readiness, waited. As person after person rose from their cots and declared themselves healed, hands raised and faces turned heavenward, the powder flashed, and the scene was recorded for other hundreds of thousands to see.

The evangelist labored until her imminent exhaustion was apparent to those closest to the stage. More than 150 persons had passed under her hands before she called a halt. “I am going out for a breath of fresh air,” she announced with rather a wan smile. “Sing something while I am gone.”

After a moment she came back, and the work went on. City firemen carried the cots to the stage. Members of the Salvation Army entered the hall and set to work. Stretcher-bearers labored with perspiration streaming from their faces. Outside the barricaded doors, the waiting thousands craned their necks and tried to see.

For 2 hours and 40 minutes, Mrs. McPherson labored. When she declared a recess, every cot patient had been treated; but the hundreds in wheelchairs had not been reached. The long procession of chairs, pushed by attendants, began to move toward one of the rear exits.

From The Bridal Call magazine

When at the close of the third week it was found impossible to pray for more than one out of every hundred coming for healing, because of the thronging multitudes, a special day of fasting and prayer was called.

Twenty thousand requests for prayer cards were distributed for as many people in two services. The hour was set for “twelve to one” Saturday noon. Friday night the city began its fast. At noon hour in stores, shops, churches and streets, the people prayed. Before the closed doors of the auditorium, crowds gathered during the hour of prayer. The results were glorious indeed, the afternoon meeting being filled with testimonies of those who had been instantly delivered in that hour. 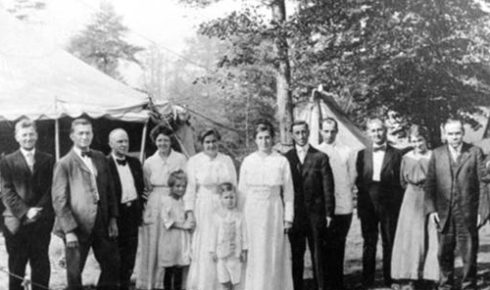 How Foursquare’s founder led to my being a Foursquare minister

Dorothy Jean Furlong with the Lord